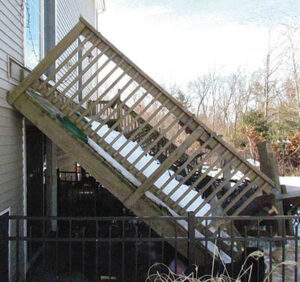 identify obvious and some not so obvious signs of failure and potential hazards, supported by a HomeCheck RI formal report with photographs for your records.  Deck Inspections are an inexpensive preventative measure to help prevent a very costly and dangerous situation, which should be conducted every 3-4 years.
.
Rhode Island is blessed with one of the longest coastlines in the country with countless amazing views and scenic land and oceanscapes, so it just makes since that we have a lot of out door living spaces and decks.  Decks – like any other type of outdoor construction are susceptible to the elements, as well as sub-standard building practices – but unlike most other structures – they are up in the air.
.

Periodic review and inspection of your deck(s) will help prevent costly damage and potential injury in the future.   Decks are also considered an added liability for rental properties, particularly coastal properties which endure harsh weather.  HomeCheck RI has inspected decks in every town in RI!

More than 2 million decks are built and replaced each year in North America.  Its estimated that of the 45 million existing decks, only 40% are completely safe. 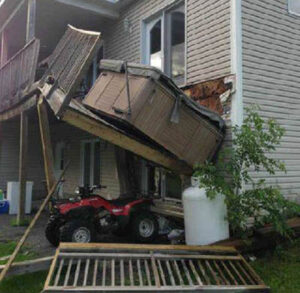 Like any other house or building, a deck must be designed to support the weight of people, snow loads, and objects.  A deck must be able to resist lateral and uplift loads that can act on the deck as a result of wind or seismic activity.  Deck stairs must be safe and handrails graspable.  And, finally, deck rails should be safe for children by having proper infill spacing.

A deck failure is any failure of a deck that could lead to injury, including rail failure, or total deck collapse.  There is no international system that tracks deck failures, and each is treated as an isolated event, rather than a systemic problem.  Very few municipalities perform investigations into the cause of the failure, and the media are generally more concerned with injuries rather than on the causes of collapses.  Rail failure occurs much more frequently than total deck collapses; however, because rail failures are less dramatic than total collapses and normally don’t result in death, injuries from rail failures are rarely reported. 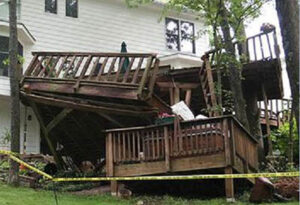 Here are some interesting facts about deck failure: